So pretty much everything I ate went well with the Ship Yard beer I drank and drank and drank.  I ate everything that is quintessential New England like clam chowder, crab rolls, copious amount of lobster in various plate settings, muscles and even a Holy Doughnut made from potatoes!  Everything was totally delicious and I am pretty sure I gained about 7 pounds on this trip as I only hit the gym one time (yay for Planet Fitness being everywhere!) and the only other kind of exercise I received was racking up 7 miles of walking around Boston.

Massachusetts is old.  I know you’re thinking, “Duuuhh!”  But seriously I felt like I was cramped up everywhere I went.  Not in a bad way though but in a holy crap this place is old and they made stuff really tiny kind of way.  The streets are narrow and make almost no sense.  For instance we stopped to visit the Salem Witch Museum and the traffic around that place wasn’t as busy as it was disorganized.  If you have a penchant for quirky seventies themed Vincent Price voice over exhibits, this place is for you!  You’ll have to part with $12 precious dollars that you may as well just light on fire in front of you because that would be more entertaining.   I don’t believe they updated the exhibit since the place first opened shortly after the witch trials were over.

Lol…  Bad museums aside Massachusetts is a pretty cool place.  The towns are just as you would picture.  They are all nestled in between several hundred year old oaks trees, the streets are narrow and the roofs steep.  Sometimes the houses are right on top of the street and you have to be careful not get run over by the disorganized traffic when the side walk suddenly disappears and you find yourself in a game of “human Frogger.”  Growing up in the mid-west I never saw a house that had a plaque stating is was built in 1736.  Can you imagine how many spirits haunt that joint?!  I’d love to spend the night in one but would probably be so scared that I’d pee myself running out of the house!

We spent an entire day roaming around Boston.  Boston is like any other city with the old and new parts except Boston never stopped giving history lessons the entire day and we didn’t even cover all of it!  First and foremost I wanted to have breakfast at a local diner.  We hiked across town to the south side of Boston and ate a diner called Mull’s.  Now nothing about the food or the diner was overly spectacular but the PEOPLE made the place one of my favorites places in the city.  These were real Bostonians.  Not people from the burbs or people who transferred from other states.  The people walking into this place were born and raised in the neighborhood and proudly refer to themselves as “southie’s and they have that undeniable Boston accent that I seriously could have listened to all day.  Side note: being an Italian, German, Hungarian girl with a temper to prove it (sometimes), I would not mess with anyone from this neighborhood.  One woman came into to the place to buy bacon for her husband (please picture a brassy ballsy  small petite blonde Bostonian chatting with a friend at the counter), “Heck if I’m gahna cook ovah a hot greasy skillet just cause he wahnts bacon on his sandwich he’s taking fah lunch!  I ain’t cookin’ that fah him this marhning! I told him he can cook it himself oah I’d walk down and buy it!”  (or something to that effect..lol)  Anyways when I go back to Boston this place will be my first stop! 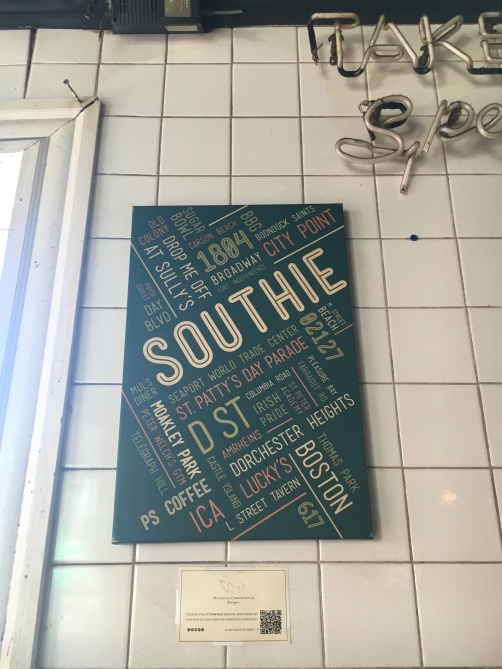 We then walked along a stretch of the city covered in art.  One place even had sidewalk chalk so you can create art yourself.  I, not even able to draw stick people freehand, chose to write the names of my awesome nieces and nephews on the sidewalks of Boston.

The history in Boston is UNBELIEVABLE!  I sat inside the Old North Church that was the launch for Paul Revere’s ride!  Totally wish I went to that church because if you get a “cubicle” (I don’t know what they are called) that sits beside a pillar I am pretty sure I could nap during a boring sermon without being seen.  This church opened in 1723 and is still holding services every Sunday.  It was way totally cool to sit inside that place and really feel the history of it.  We walked along parts of the Freedom Trail

and that led us to Boston’s North End (Little Italy.)

We went to a place called Mike’s and I had the biggest cannoli I had ever laid eyes upon.  Sorry I haven’t a picture but I devoured the ricotta cannoli before I even had a thought to take a photo.  This thing was so darn good it gives Gallucci’s  on E. 66th and Euclid in Cleveland a run for it’s money.  After eating the giant cannoli, because “when in Rome”, we walked across the street to a pizza place for pizza where we found two Italian tourist couples who were ordering slices of pizza and beer and the hot guy behind the counter whom I assumed was just a regular dude started conversing with them in fluent Italian!!!!  Swoon!

Boston is a must see no matter where you are from.  That city is patriotic and makes your feel your strong American roots!

I didn’t make it to the site of the Boston Tea Party nor many other historic places in Boston but that just means I’ll have to go back!…

“Give what you have.  To someone, it may be better than you dare to think.”